Day Tour to Alexandria from Cairo 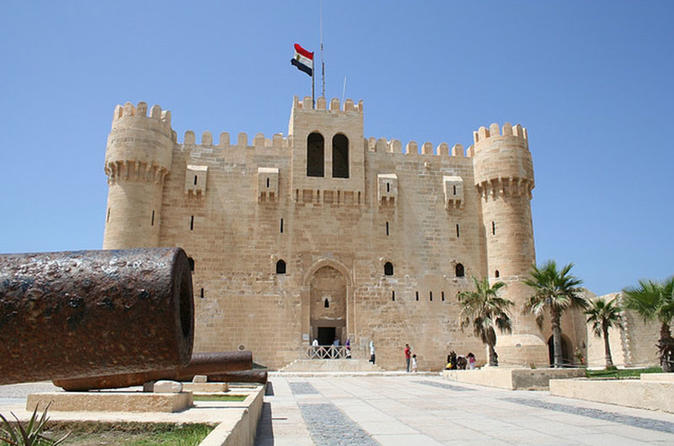 Enjoy a private guided day tour from Cairo among the pearl of the Mediterranean “Alexandria”. You will visit the magnificent sites of the city that dating back to different periods of the Egyptian history.

Our TourAt 7.00 am , You will be escorted in an air conditioned vehicle from your hotel towards Alexandria (about 3 - 3.30 Hrs. Driving) where you will meet your tour guide in Alexandria to discover the beauty and the Greco Roman civilization within a day-tour starting with visiting the catacombs of Kom el Shoqafa which are considered one of the wonders of the middle ages . It's the largest known Roman burial site in Egypt, with three tiers of tombs that could accommodate up to 300 corpses. The cemetery originally was dug to be a private cemetery for one family ,then it was converted to be a public cemetery the architecture of the tombs mirrors Greco-Roman styles. This can be seen in the wall decoration, which shows a unique combination of Egyptian, Greek, and Roman artistic traditions. People are buried here in sarcophagi, in shelves, and in urns of ashes after cremation.

After that going to visit The Roman Amphitheatre which is Located in the heart of Alexandria, Kom el-Dikka is an extensive Roman theatrical and residential complex. It includes the only known Roman amphitheater in Egypt, an impressively well-preserved structure composed of thirteen terraces. This was constructed in the traditional Greek style.

Then, You will go to get a photo stop at ( Qaitbey’s Citadel) which is considered one of the most important defensive strongholds, not only in Egypt, but also along the Mediterranean Sea coast. It formulated an important part of the fortification system of Alexandria in the 15th century A.D.; The Citadel is situated at the entrance of the eastern harbour on the eastern point of the Pharos Island. It was erected on the exact site of the famous Lighthouse of Alexandria, which was one of the Seven Wonders of the Ancient World.
After that a Photo Stop from outside to ( Abu Al-Abbas Al-Mursi) Alexandria’s largest mosque; with a cream colored façade, four great domes, arabesque designs and a high minaret. It is located in the Anfoushi neighborhood of Alexandria, near the Citadel of Qaitbay.
We will end our amazing tour by visiting the Modern Alexandria Library, the Old library was very famous all over the world for its huge books capacity of different sciences and literature. It was damaged several times during the Greco Roman period until it vanished. The beginning of reconstruct the library started at the late 80s of the last century.. The special shape of the modern library of Alexandria is considered a special architectural germ. The library the history of the library and the city of Alexandria and the Egyptian history as a whole, The cultures of the Arab world, Africa, and the Mediterranean countries , and The culture, ideas, and civilization of the whole world Location.
Then you will be picked up back to your hotel in Cairo

Enjoy a private guided day tour from Cairo among the pearl of the Mediterranean “Alexandria”. You will visit the magnificent sites of the city that dating back to different periods of the Egyptian history.